Die-cuts aren’t exactly my cup of tea. They’re hard to handle, they look bad in binders, and they are more prone to damage. But you know what is my cup of tea? Donruss Elite. I love this set. I don’t care if they show up as an unlicensed prospect set or a full-blown MLB licensed set, these cards rule. I love the shine, the design, the feel… everything. Although I’ve never busted a box of Elite (they are fairly expensive), I have gotten numerous singles from around and about and I enjoy owning each and every one of them. 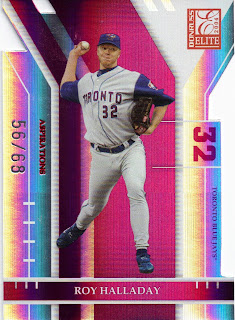 Here’s a little (literally) pickup off the bay from a few weeks ago. I got it fairly cheap from a good vintage seller. 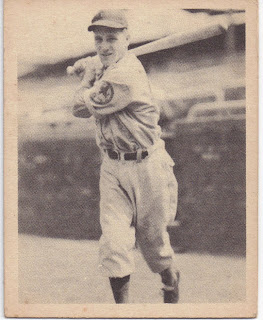 Emmett, or Heinie (yes I laughed too, but it was actually a common nickname for baseball players in the early 20th century) was an infielder for the Philadelphia Phillies from 1938-1941. While his numbers weren’t too impressive, he is part of baseball history for being the first player to hit a leadoff homerun in his first career at-bat.

For the card itself, it is now the oldest card in my collection and in pretty good shape (it could easily grade a 6). I’m not a big fan of the pre-Topps vintage, but if I come across cards like this for fairly cheap, I’ll snag them up. Especially if the player's name is Heinie.
Posted by longlivethewho at 9:09 PM 1 comment:

Hello all… long time, no see. You may be wondering I’ve been of late, and perhaps you may be thinking “Gee, did Nick lose interest in the hobby?” In ways, yes I have. As I sit here typing this, I’m keep looking at the multiple piles of cards stacked on my bedroom desk and all the count boxes and binders cluttered on the floor. I put way too much money into this hobby, and it’s time that I start controlling the way I spend before things really spiral out of control. Now to completely run away from the hobby and drop everything is kind of stupid. I will definitely be cutting back on a lot of things. Buying singles and boxes off eBay, Blowout, wherever… gone. I’ll be going through my entire collection of cards and sorting them out; what sets do I want, what other players and teams do I mind having, what should be thrown away or shipped away, and all that fun stuff. So if you receive a package from me with a huge stack of your favorite player or team, you’ll know why. So, what will remain the same? While I will be cutting out purchases of miscellaneous singles and boxes, I will still put cash towards sets I’m collecting and to my A-Rod and Roy Halladay PCs. Trading with fellow bloggers for these needs and Yankee cards will continue as well because, let’s face it, trading is friggin’ awesome.

With that being said, I have a huge weakness for discounts. And today is the Holy Grail for discounts. You do the math. No way my Paypal account wasn’t gonna get hit by this one. Yeah, this sounds extremely hypocritical after I pronounced I would stop buying boxes, but I vowed to only spend money on boxes of sets I’m building and finishing so I can get them organized and in binders. I think I did quite well for myself.

After hearing so much about the Blowout fiasco (see post #139 and further), I avoided them and went to the Baseball Card Exchange. This Illinois-based store specializes in a lot of vintage and old boxes/cards. They also specialize in a lot of fun crap and boxes that are 5-10 years old… right up my alley. I picked these up for a good price.


I had a tough experience with my last Bowman Chrome box (a future box break post) and I wanted to rip open a few more so I can knock out the set. I really like 2000 BC… I know it doesn’t have the biggest rookie class, especially compared to 99’s and 01’s class, but the design is neat and I absolutely love the inserts. But more on this when I post my box that I busted a month ago (thank goodness football is over). In keeping with Chromey goodness, I snagged a box of 2000 Bowman Chrome Draft for a cheap 12 bucks. The set includes names such as Mark Buehrle and Adrian Gonzalez. Uber cool.

I busted 2007 Topps Chrome a while back on the blog and I enjoyed the experience. It should be another fun break, but I’m most excited for my red refractor box topper. These cards are sweeeeeeeeeeeeeeeet. I grabbed a box of 2005 Topps Update in hopes of scoring some Jered Weaver RCs for grading. Although, I wouldn’t complain if I pulled a rookie card of this guy.

I went over to Dave and Adams Card World and they had some good deals as well. I snagged these.


I’ve featured literally nothing but baseball cards on the blog, but it’s time to expand into farther horizons. These were some great deals anyway you slice it up. I’m a growing hockey fan and it’s nice to start up a collection. What better way to start than with the 2007/08 UD NHL Rookie Class. Never heard of it? Me neither, but it was only 95 cents a box. And, yeah, I’m buying some of those. Each box comes with the same 50 rookie cards, including names that beat my Flyers in the Stanley Cup like Jonathan Toews and Patrick Kane. What attracted to me to these things (besides the dirt cheap price) was the oversized Commemorative Card that comes with each box. But now that I think about it, I should have stacked up more of these things, but oh well. It’s just paying 95 cents for an oversized Commemorative Card.

I’ve fallen in love with basketball again after I stopped caring for it about four years ago. I used to be a die-hard Philadelphia 76ers fan back in the Allen Iverson days and remember their dream run all the way to the 2001 NBA Finals where they were crushed by the Lakers. When the core players from that squad started leaving (including my boy Dikembe Mutumbo), I started losing interest in the Sixers and in basketball. However, I started getting back into it thanks to my obsession with NBA 2K11, one of the best games I’ve ever played. Although it’s not exactly the most ideal time to be a Sixers fan, it still feels great to be back and supporting the team. I’ve always liked Panini’s effort in basketball, so I was quite tempted to try some of their flagship brand from last year. And think about it… 48 packs is a lot of friggin’ cards. I got the box for about 15 bucks, so that averages out to 31 cents for a pack. Yes, that’s right. 31 CENTS FOR A PACK OF TWELVE CARDS. No way was I passing that up. Even despite the price, 2009/10 Panini has some nice photography and inserts, and they offer a chance to pull a Blake Griffin rookie. I’ll definitely scoop up that opportunity.

Whew, that was winded. Expect a big series of all these boxes getting busted sometime in the near future. But first I’d like to catch up on other boxes and singles that have been lying around and yet to be shown to the blogosphere. I have been neglected the blog for a while now and I want to start posting regularly again. I learned how to prioritize, organize, and limit myself in this great hobby… hopefully these traits keep a steady flux of cards coming in and a steady bank account.

Now, if I’m not devoting all my cash to baseball cards, what will I do with it? Save it? Psht, yeah, okay. My love for Walt Disney World, Disneyland, and the Disney Company has been renewed with a burning passion since the summer and I want to expand my many Disney-related collections which I can display quite nicely (compared to cards where they just sit unnoticed in binders). Disney pins, attraction posters, cards (yes, Disney cards, a bit hypocritical), movies, books, memorabilia… you name it, I want it. For anyone who wishes to follow the Disney chase, you can check out my other blog, Bury My Heart in Walt Disney World, where I’ll be posting for the time being. I want to get more DVDs to add to my collection, and I also want to get more CDs and music to feed my growing interest in different genres and sounds. Perhaps I’ll invest some bucks into memorabilia as well, from everybody from actors to athletes. I’ve always wanted a Mariano Rivera autographed ball.

Whew, that was winded. Expect a big series of all these boxes getting busted sometime in the near future. But first I’d like to catch up on other boxes and singles that have been lying around and yet to be shown to the blogosphere. I have been neglected the blog for a while now and I want to start posting regularly again. I learned how to prioritize, organize, and limit myself in this great hobby… hopefully these traits keep a steady flux of cards coming in and a steady bank account. Thanks to everyone that has stuck with For Card’s Sake and kept our great writers (myself) rolling. We do it for you folks!

Since we all now I’m a sucker for group breaks, I participated in yet another of Thorzul’s breaks… a box of 2004 SP Legendary Cuts and 2004 Topps Clubhouse Collection. I picked up the Royals and struck gold once again for the boys in the powder blue. 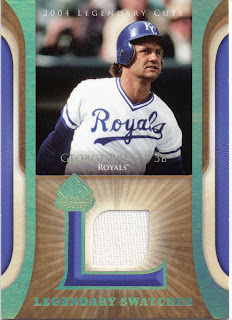 The scanner decided to you know, randomly change colors on me. The sepia/green color you see is actually gold. After looking at more of these cards, it seems that this is the way the color scheme comes out on these cards if they’re scanned in. Either way, it’s beautiful in person.


I’ve found a dirty little secret in picking up the Royals in my group breaks. In all but one of the group breaks I’ve participated in when picking KC, I’ve received a relic card. And these aren’t slouch players either (save the Alex Gordon bat relic I received in the 206 break)… along with this Brett, I got a sick Bo Jackson relic from 2009 SP Legendary cuts. I can’t say I’ve been more than impressed with my string of luck with the Royals.

Thanks Thorzul for hosting another break, and looking forward to many more in the future!
Posted by longlivethewho at 8:05 AM No comments:

A Man They Call Beardy...

… listed this sharp Alfonso Soriano relic as trade bait that I gobbled up immediately. 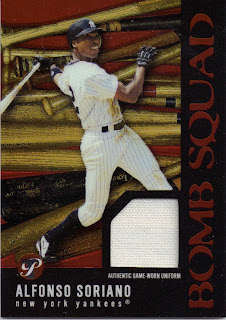 Shmexy right? I wonder if by “Bomb Squad” they meant his bat or his contract? Baa-zing!


Beardy’s a good man, you should check out his (in)famous blog.
Posted by longlivethewho at 5:42 PM No comments: